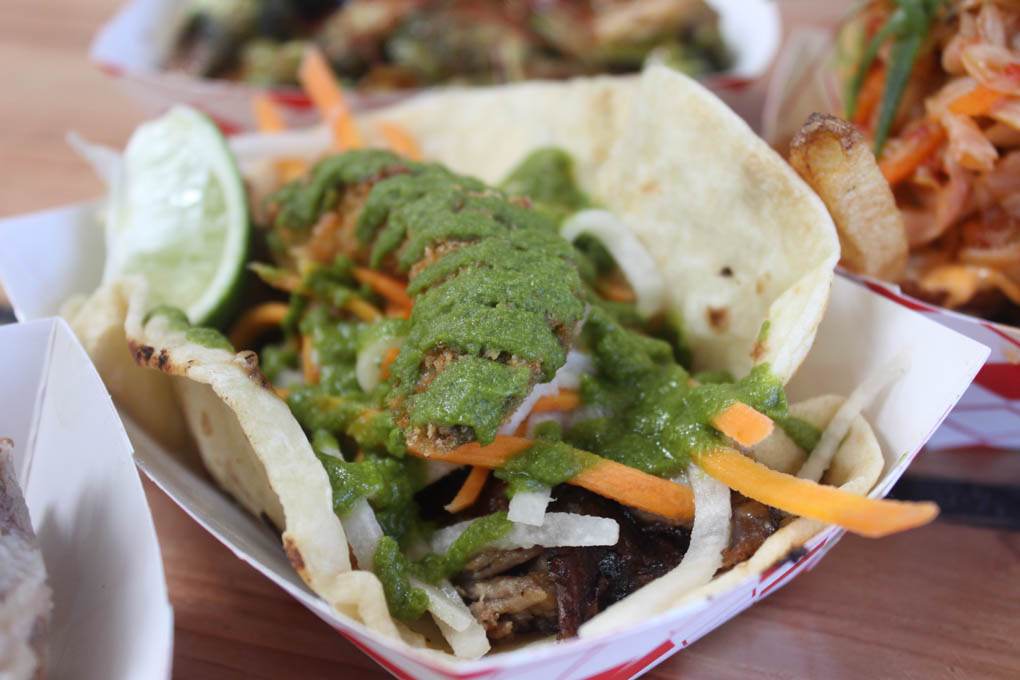 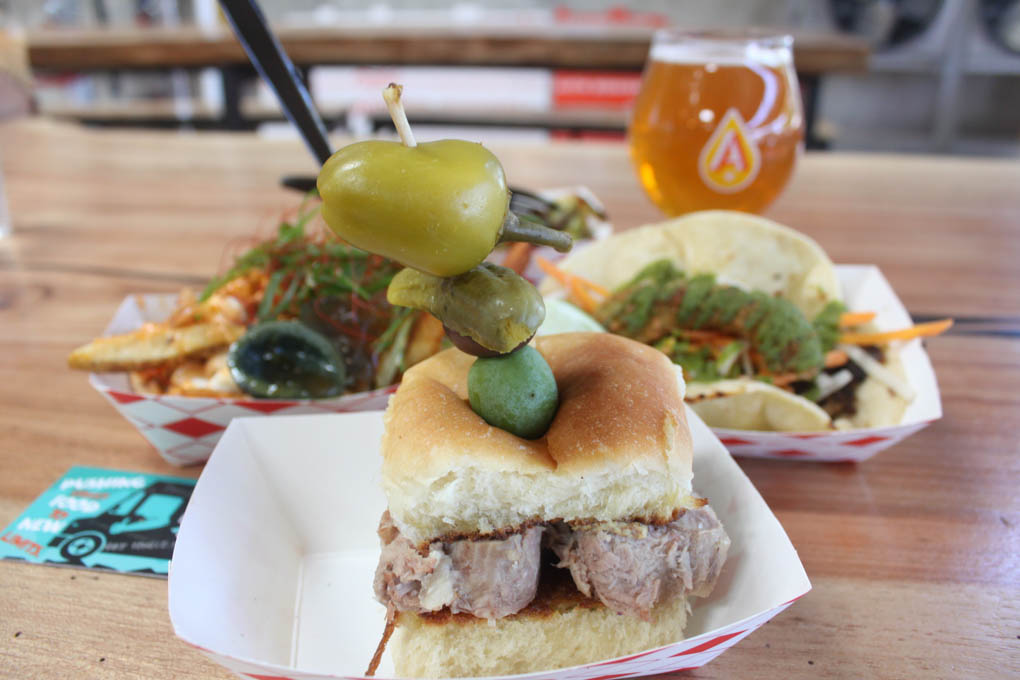 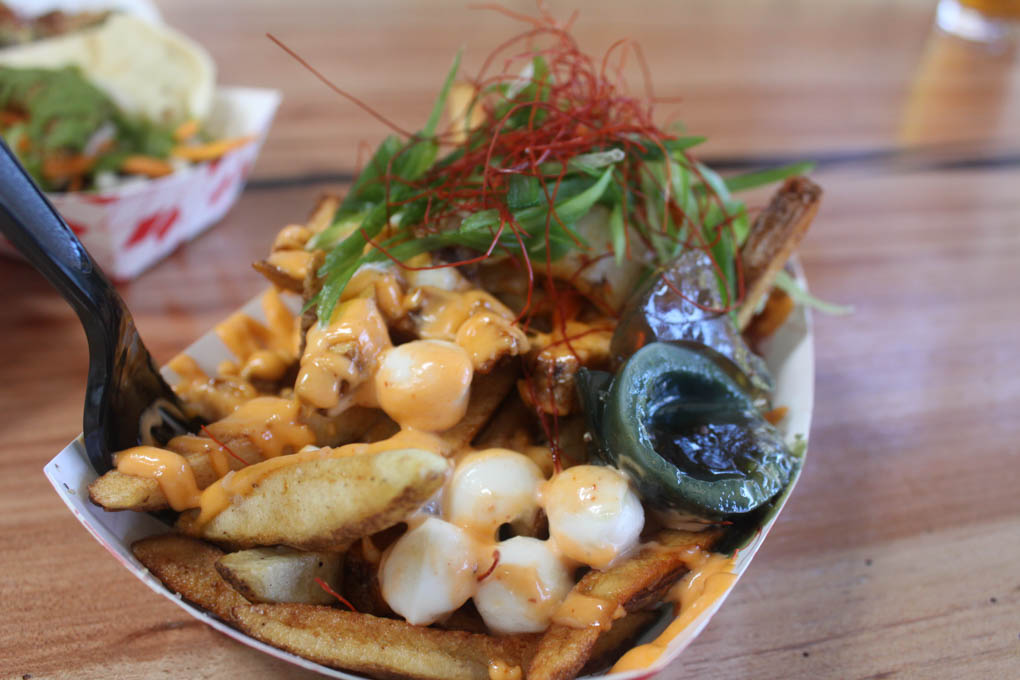 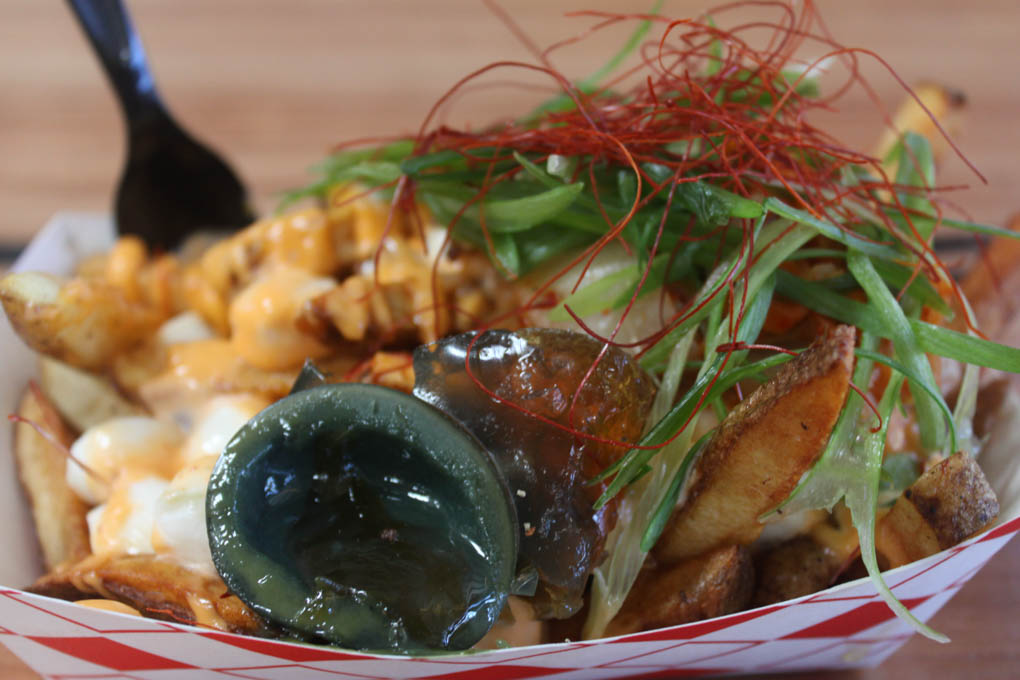 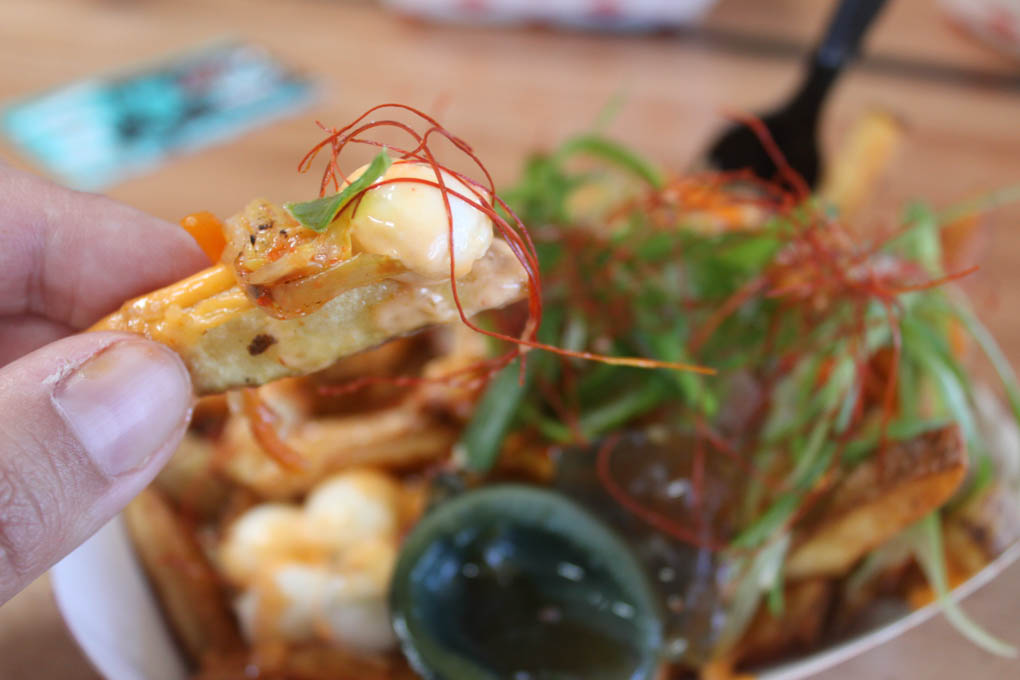 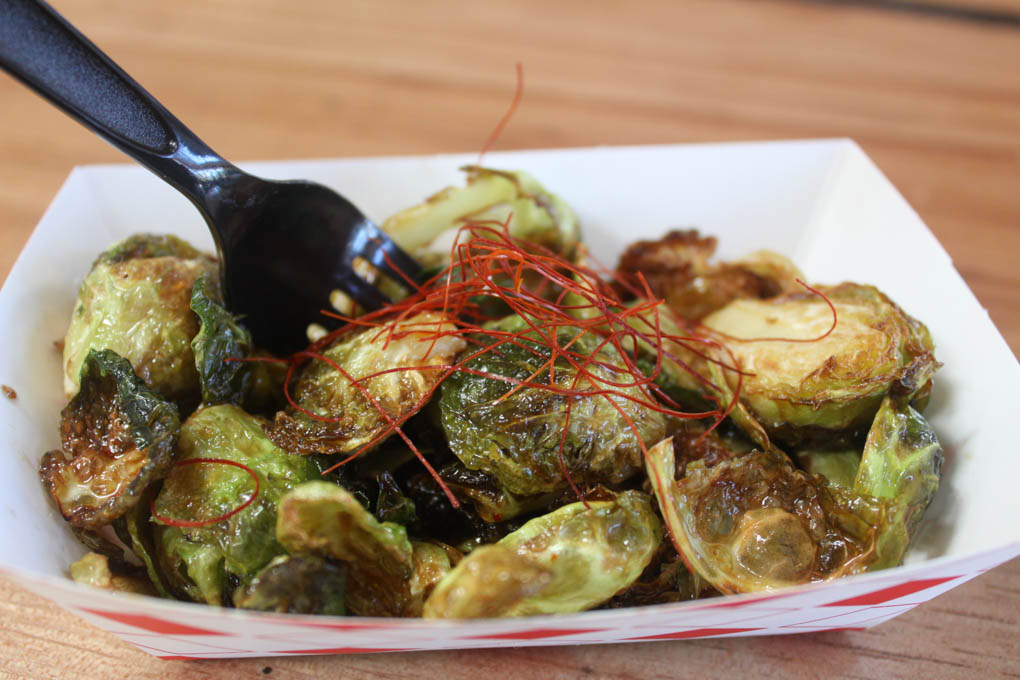 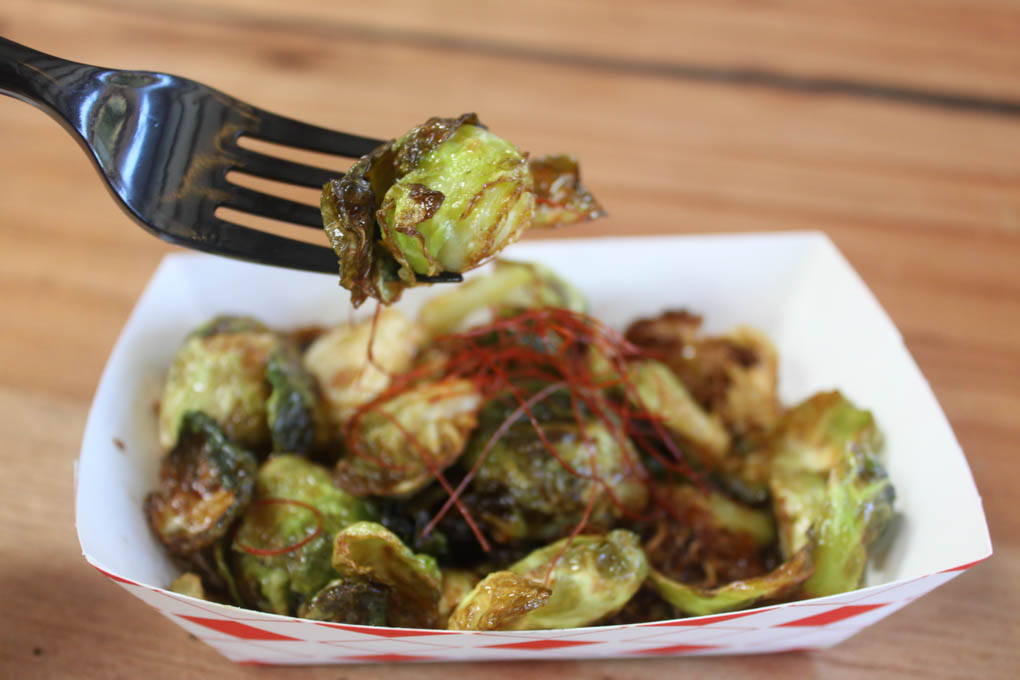 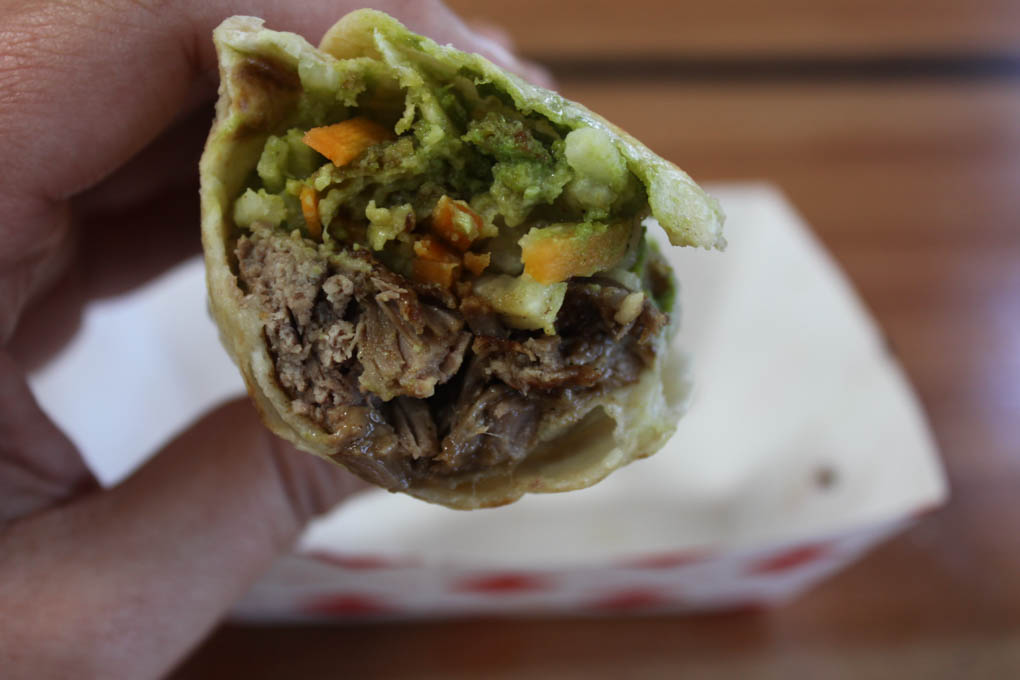 Austin Taste Us is a food truck sporting bright blue flames on a black background. They serve up tasty delights all around Austin. They can be found rolling up into business parks and breweries giving locals an opportunity to taste their delightful fare! I had the perfect chance to try them while they were satisfying the lunch crowd at Austin Beerworks.

Austin Taste Us describes themselves as a “food truck designed to push street food to new limits”. They tout that they have, “ostentatious food for Austintatious people”. They take those peculiar foods we don’t usually indulge in and turn them into culinary masterpieces!

A little new on the foodie scene, Austin Taste Us just debuted in 2017. Owned and operated by a husband and wife team, Austin Taste Us is a food truck—a completely “drivable” restaurant on wheels. Aaron and Kassandra Esserman are considering their next venture to be a trailer as opposed to a truck. Chef Aaron Esserman had been wanting to open an establishment for years all with the desire to encourage people to eat unusual foods in the form of the comfort foods they love. Aaron hails from Florida and evidence of those Floridian flavors can be detected in many of his dishes.

The day I tried Austin Taste Us was a warm Sunday afternoon at a local brewery. Many told me to try the Kimchizzee Fries for an appetizer, and that is what I did. I was excited to try their house made kimchi.  The fries came out hot and piled high with all the Asian influenced foods I expected and some that surprised me. The fries were the best kind with the skins still on them and crispy enough to be a foundation for all the toppings. They had a little sriracha aioli and mozzarella pearls giving it a great creamy texture. Then as most Asian flavors go with full on Yin-Yang approach, they hit it – spot on! In addition to the kimchi, they had pickled radish and carrot and the surprise—a preserved duck egg! I had heard of them, but never tasted one. But, there it was peeking out on the edge of the fries with a resemblance of a black opal, but with a creamy center. I did what came naturally to a foodie, I jammed my fry in it and covered the tip in its black silky yolk. It was good! The yolk had a sharpness to it like an aged cheese. The fries came garnished with their signature Korean chili threads and green onion curls. I only needed a sip of my Bloodwork Orange IPA to pair with it. That was most definitely an appetizer that got me salivating and eager for my entrees!

Austin Taste Us has a deal. I just love a good deal! If I ordered two entrees, I could get a side order as part of a combo deal.

There was this Lamb Taco that was calling my name and a Head Cheese slider. The lamb was nestled in a flour tortilla with a french-fried avocado and drizzled with a charred scallion and cilantro purée. A few pickled radish and carrot ribbons adorned the taco adding an inviting splash of color. The lamb was so tender you could have shared it with a toddler – okay, maybe the last bite if you could keep from eating it! The flavors all melded well together! I think lamb and avocado could be the new steak and onion!

Entree number two was the Head Cheese slider. Being from Ohio, I needed no explanation on what head cheese was. Chef Aaron said he makes it himself—and I was ready! His toughest competition is my grandma. A simple, almost humble sandwich on a roll with spicy brown mustard and some pickled mix poked on a sandwich pick. I took one bite and WOW! I’m glad grandma does not get on the internet, because she lost! This sandwich is best eaten with alternating bites of the pickled mix and the beer all on the palate at the same time.

Brussel sprouts! That is what I ordered for my side item. Asian barbeque glazed brussel sprouts topped with those wonderful chili threads. There was no problem eating my vegetables! They were crispy and full of flavor from the ginger soy vinaigrette they are tossed in. I am wondering where tasty brussel sprouts have been my entire life? But I have found them now! I finished my beer along with bites of brussel sprouts and was very content!

Austin Taste Us is the perfect name! All of Austin needs to get online and find out where the truck will be for the day. I know they frequent an industrial park near my office and I know a lunch break or two will be spent there!