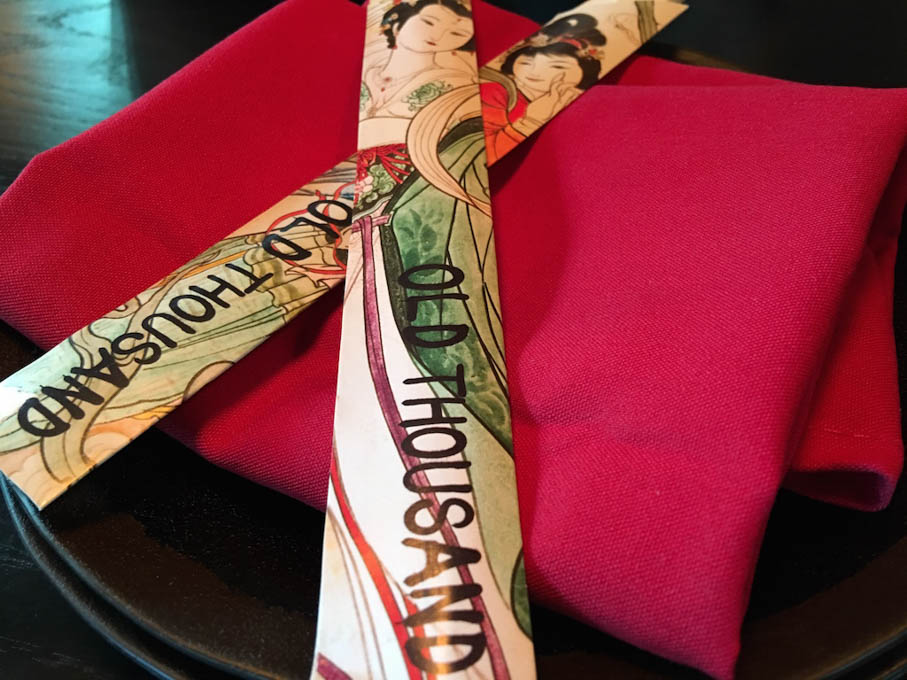 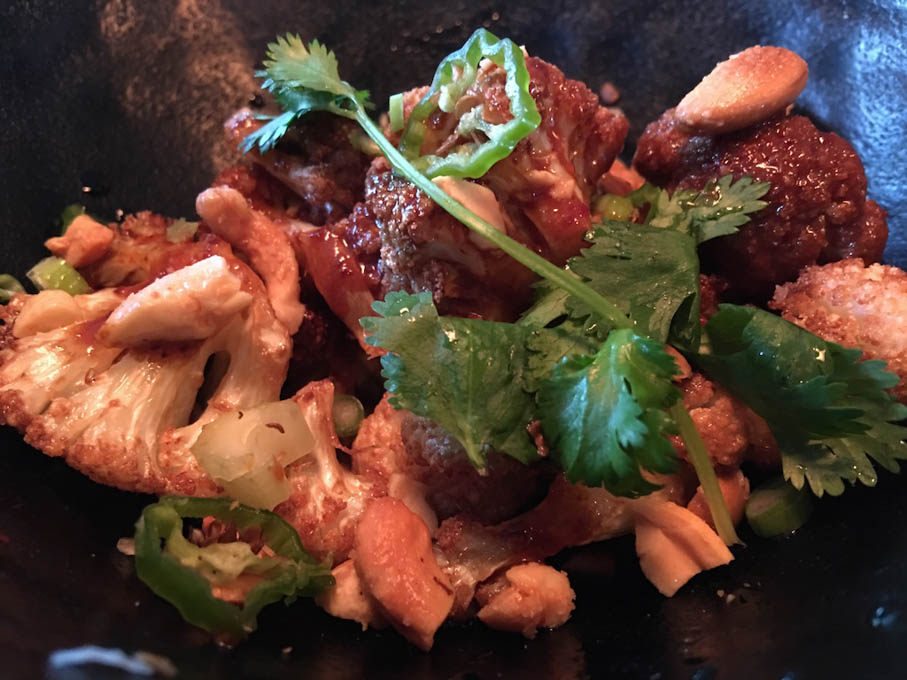 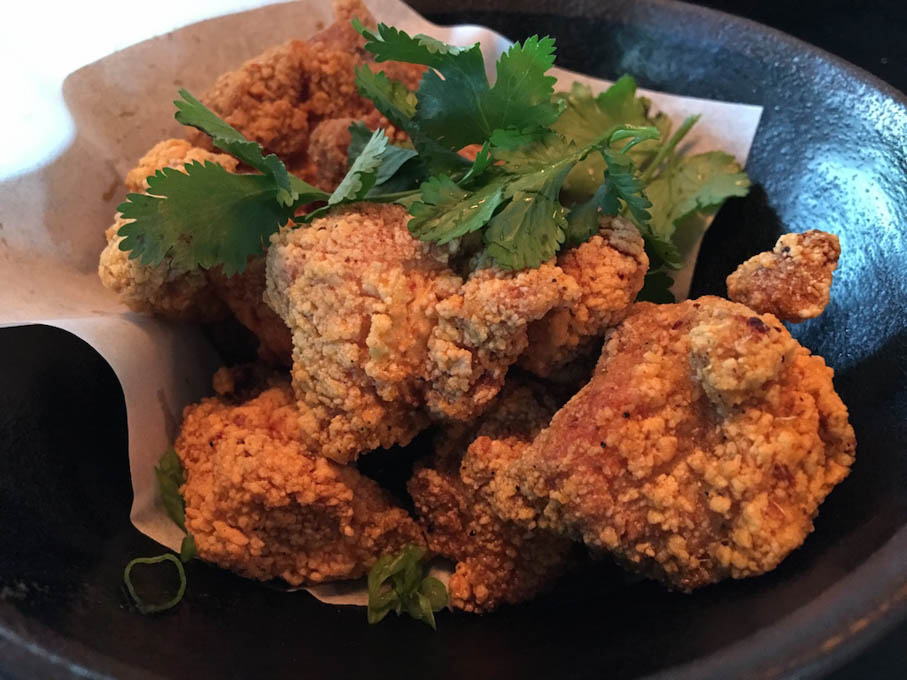 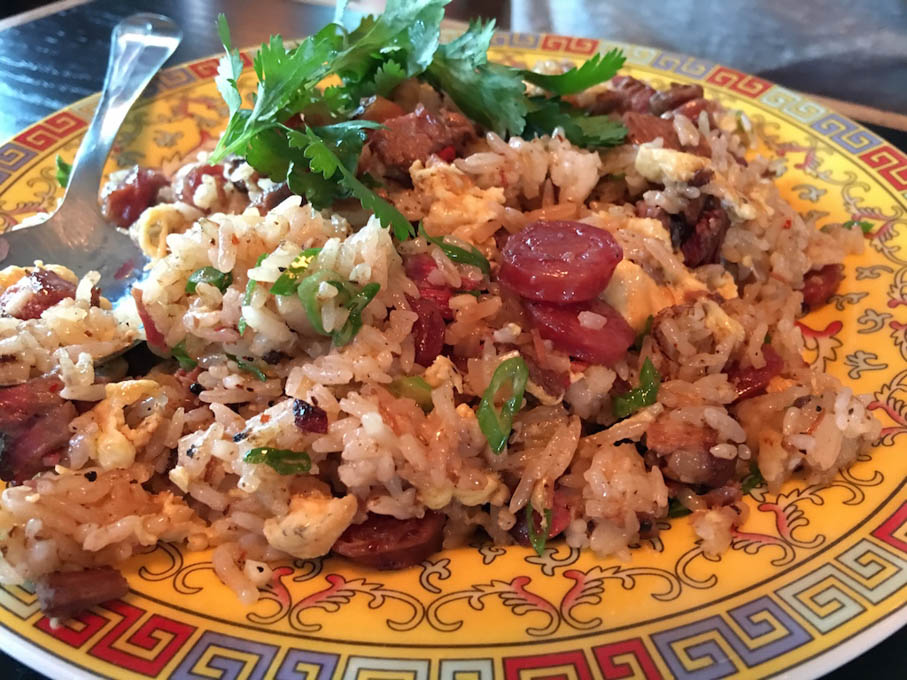 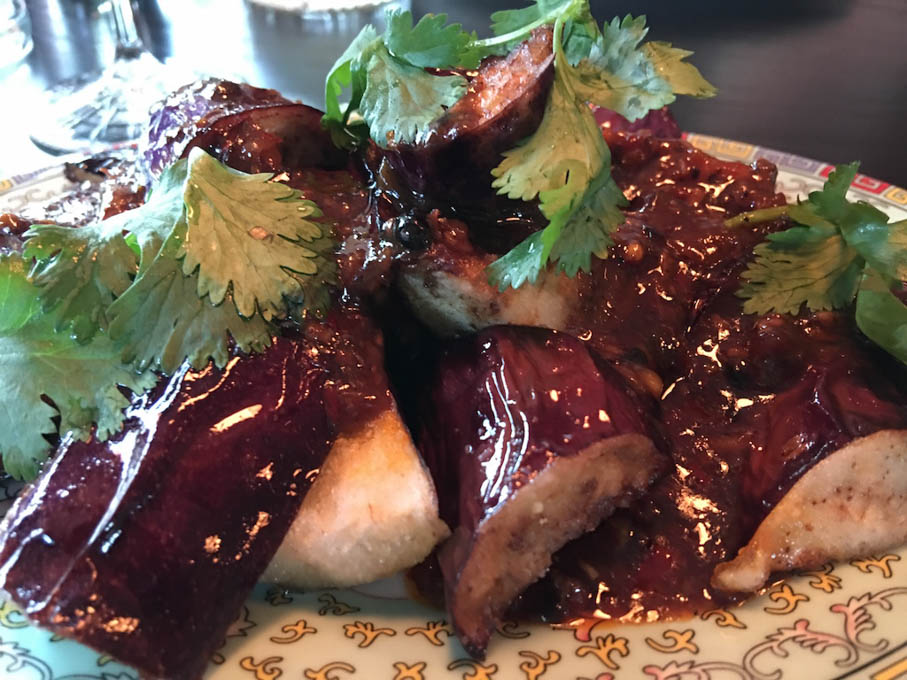 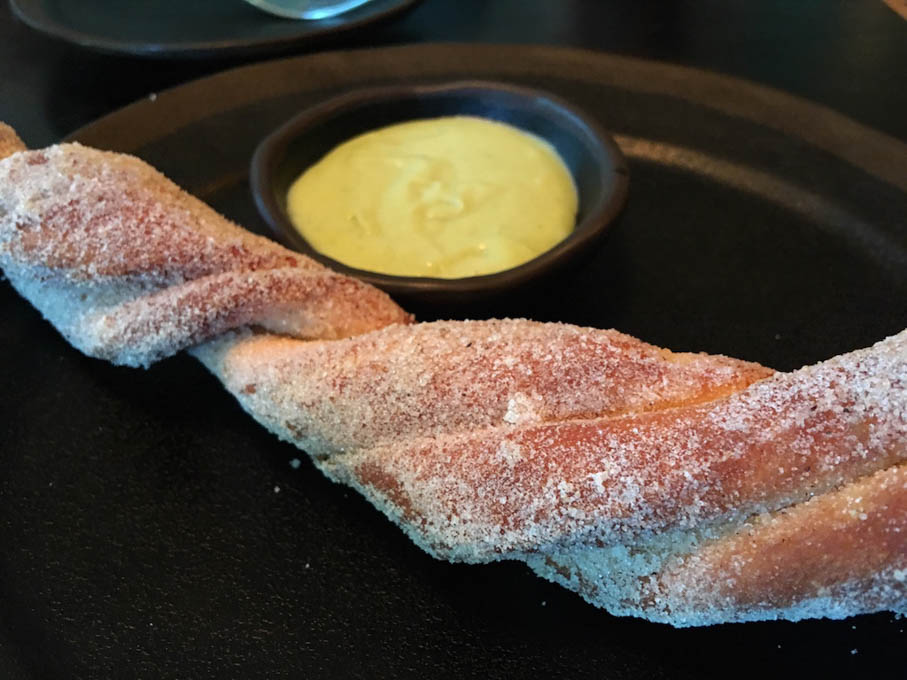 Situated amongst the hip scene of East 11th street is one of Austin’s newcomers, Old Thousand. Old Thousand is the brain child of parent company SMGB Hospitality group, with partners hailing from Austin favorites such as Uchi, Moonshine Patio Bar and Grill and HopDoddy Burger Bar. The restaurant is run by Chefs James Dumapit and David Baek, whose vision was to bring Austin-Chinese to the masses. Not to be confused as a ‘fusion’ restaurant, the purpose of Austin-Chinese was to bring about the locally sourced flavors and foods we already know and love in this city and combine them into Chinese-American food.

A space that was once home to a Mexican restaurant is now decorated with splashes of red, gold Chinese foo dogs, paper lanterns, and bright, lively floral print wallpaper. Upon entering the restaurant, which is situated just below street level, guests are given the option to dine at the bar, the chef’s bar or one of the many tables lining the restaurants dining room. The restaurant does have a full bar and offers a daily $5 “Lucky Time” happy hour menu with appetizers, hand-crafted cocktails, beer, and wine. The menu blends many traditional Chinese flavors and spices with local offerings, such as BBQ meats and farm grown vegetables.

We started with two of the “Lucky Time” menu offering and opted for the spicy Chongqing chicken, and the Kung Pao Cauliflower. The chicken was presented as a handful of large white meat chunks in a fried chicken tender-style breading with Szechuan Chili Oil, green onion and cilantro. The spice created a dry warmth at the back of your throat with its chili-spice and hints of pepper and garlic. The cilantro was a refreshing addition, which prevented the chicken from even needing a sauce. The Kung Pao cauliflower was definitely not an appetizer to be passed up! With the increasing popularity of cauliflower on restaurant menus lately, it seemed only right that we gave it a go. The chunks of crisp veggies were nestled within a healthy scoop of Kung Pao sauce and sprinkled with toasted cashews and shishito peppers. The Kung Pao sauce was dark with notes of red chili, chili oil and a distinctive punch of spice—but certainly not too much as to be overwhelming!

For dinner, we decided to try a little Austin and a little traditional. While the night’s featured specials included two different fish options, a mussel dish in a Chinese beer broth, Tsing Tao, and Chinese spare ribs, the house special of Brisket Fried Rice called to us! A generous portion of fried rice was mixed about with brisket from local Mickelthwait BBQ, Chinese sausage and green onions. The brisket was smoky and tender, which paired perfectly with the house-made sausage slices. It was a unique take on a traditional dish and perfectly summed up what “Austin-Chinese” is really about!

Not to be outdone by its meaty competitor, the house special Mapo Eggplant was also an excellent choice for those looking for a filling, satisfying vegetarian options.  The plate was presented with a heaping pile of purple eggplant, covered in a spicy chili bean paste with Szechuan spices. The eggplant had been soaked and prepared in such a way that any hint of bitterness was long gone. It was gently seared, which gave the edges a beautiful crusty finish. A perfectly portioned bowl of white rice was served with the eggplant, which helped to sop up the rest of the delicious sauce!

Much like a kid at the Chinese buffet, I went straight for Old Thousand’s take on the traditional Chinese doughnut for dessert! Like the round doughy balls covered in cinnamon and sugar that we know and love, Old Thousand took that Chinese doughnut, rolled it out and kicked it up two notches! The long dessert, which resembled a churro, was dusted in a cinnamon-sugar-esque concoction consisting of Chinese five spice and sugar. It had the consistency of a perfectly fried beignet with a tender, doughy center. It was served with pandan cream custard, which might be a bit of a surprise if you aren’t familiar with the pandan leaf. The pandan extract lends a beautiful green hue to the custard and bears a light, fresh coconut taste—which was a cool contrast to the doughnut’s fluffy texture.

The meal was quite a success from the start to finish and I highly recommend indulging in one of their beautiful and innovative cocktails with your dinner! In true Chinese fashion, the meal was rounded out with the traditional fortune cookie. The wait staff at Old Thousand were welcoming, knowledgeable and happy to offer up suggestions. Old Thousand is a welcome addition to the Asian food options in Austin and should not be missed!