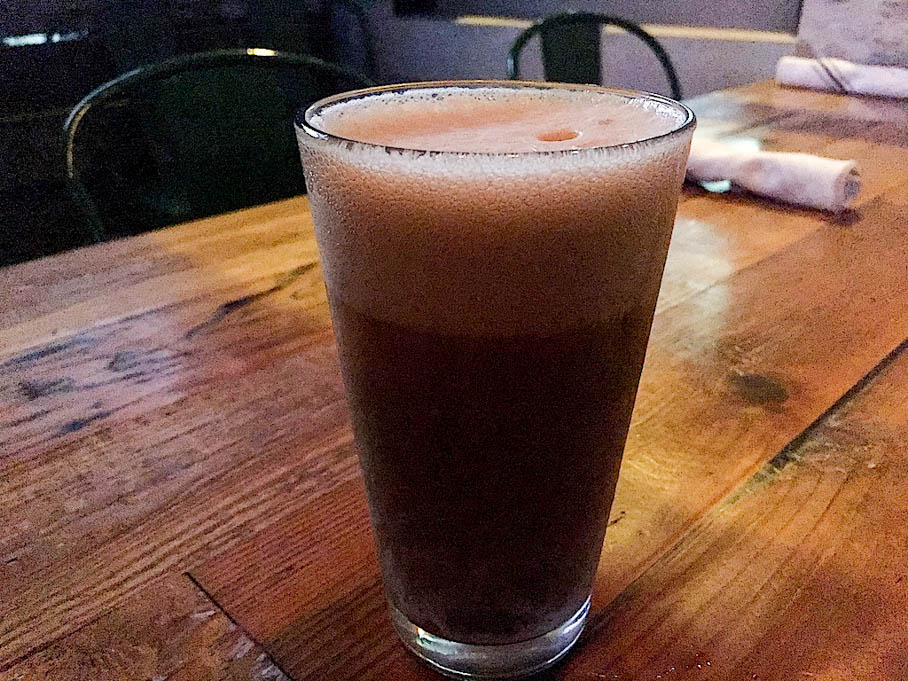 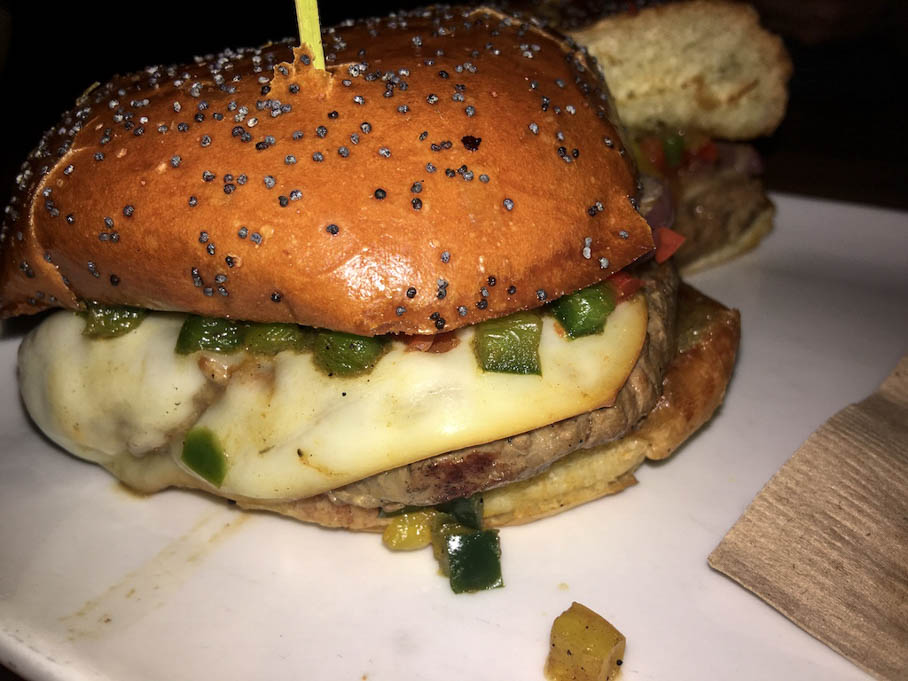 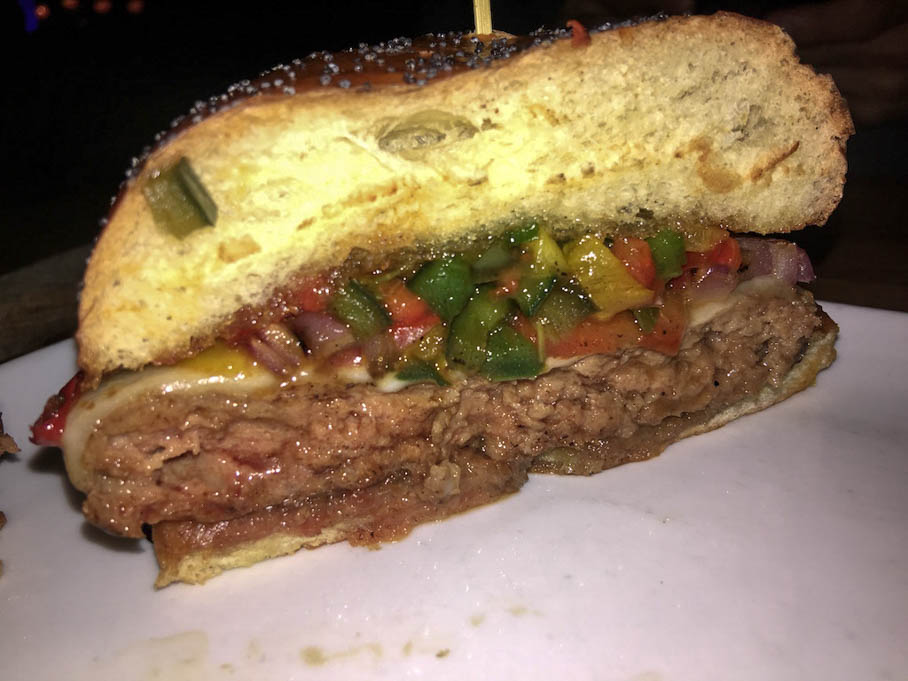 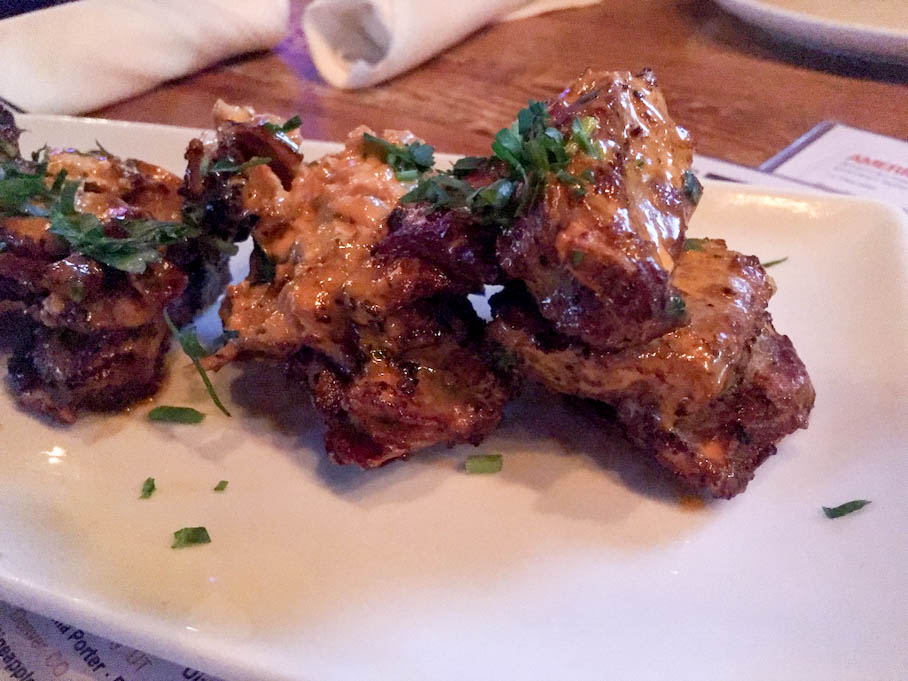 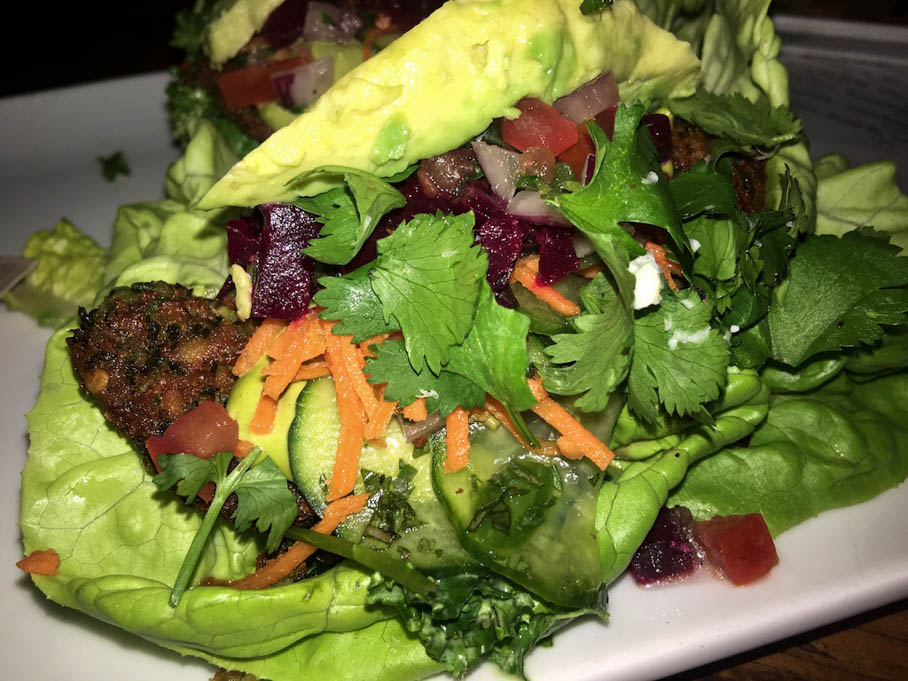 Every March, Austin becomes a playground for music, film, and techies alike, as the mammoth event that is South by Southwest (SXSW) descends upon us. Having survived a couple of SXSW seasons already, I decided to venture downtown and watch the madness from the sidelines. I situated myself at Eureka!, a California-based burger chain located at the corner of Brazos and 6th streets. Lined on two sides by floor to ceiling open-air windows, it was the perfect spot to take it at all in. Eureka! is known for their unique take of American fare as well as their extensive list of small batch whiskies and hand crafted cocktails.

The vibe inside Eureka! is a unique mixture of historical, with a rustic vibe and a bit industrial atmosphere all at the same time. You will find a mixture of high tops, booths and long community tables situated around the restaurants attention-commanding copper bar. The bar features a myriad of unique taps and rare whiskey bottles. Reclaimed wood from old whiskey distilleries can be found surrounding the bar, the walls, a mixture of elk-horn chandeliers, and copper lamps that drop down from the high ceilings. The mood was lively this particular night with the guest musicians telling their tales of musical festival adventures and filling the restaurant with sounds of their guitars and electric turntables. There were out of towners, locals, music industry enthusiasts, and sports fans alike—all intermingling and simultaneously focused upon their choices of entertainment.

At the recommendation of our waitress, we opted for the ever-popular Osso Bucco Riblet appetizer. It arrived quickly, and to our pleasure, was much larger than I would have expected an appetizer of this nature to be. A large row of tender, sherry-braised pork riblets that were generously sauced with a unique house-made buffalo firecracker aioli would have made a meal itself. Not wanting to deter from the standout features of this appetizer, I paired it with Evel Ale, a blonde ale from local South Austin Brewery. I was mostly successful in rescuing the remaining sauce from the plate, with the bits of pork which had fallen from their bones, without having to resort to publicly inappropriate finger licking!

The main menu boasted a wide range of options, from their signature burgers, to tacos and even fancy salads. To be sure I wasn’t missing the hype, I ordered the Bison Burger, which was topped with the sticky sweet goodness of a bacon-infused jalapeno jam, diced charbroiled tri-color peppers, grilled red onion, and a beautiful layer of smoked mozzarella. The burger came split in two, which proved to be helpful, because it’s juicy goodness would not have made it a smart choice for Miss Manners to order on a first date. This Bison burger proved to be well deserving of its two-napkin status! The bison was fresh and tender! Furthermore, the sweetness of the jam offset the naturally game-forward tone of the bison! Not wanting to deter from the already delicate, sweet and savory balance of the bison burger, I chose a very limited release apricot Gose called Queen of The Mist from the Martin House Brewing Company in Fort Worth, TX. It was a complex, tart, slightly salty, yet sweet choice and there couldn’t have been a worthier accompaniment to such a beautiful burger!

Next I decided we needed to take it back to Texas with some taco love! But why order a traditional taco when you can throw in some flair and go all out for a falafel taco? Nestled in a two-handed lettuce cup, it was large, perfectly spiced and flavorful falafel patties that were treated with the perfect basting of garlic-forward tahini. It was topped with a heaping mound of garden fresh beet chunks, avocado, chopped kale, watermelon radish, and fresh pickles. What sounded like something well outside the comfort zone of Austin’s taco super fans, was a healthy, filling and fresh burst of flavor. The very nature of falafel and tahini may have too much spice for some, but the fresh, juicy vegetables and perfectly sliced thin portions of pickles created a balance like no other! Each bite was a tender mouthful, accented by fresh crisp lettuce, which boldly supported the weight of these massive tacos until the very last bite. I made the decision to go with sweet potato fries and I can assure you it was a very smart decision! The thick fries were coated with a mix of cinnamon and honey, almost making for more of a dessert-like snack, which paired well with the garden-fresh, herbaceous flavor of the tacos.

I often find it hard to make it into the dessert round! Furthermore, having been completely gluttonous and unable to push away the plates before, I made the decision to power through dessert. Unfortunately, I opted to bypass the heavenly sounding signature Bourbon Barrel Cake, but I instead ordered the adult-version of an ice cream float. Given the impossible choice of double vanilla, or thin-mint-esque porters, I opted for vanilla and did not regret that decision one bit! I am not normally not one to order the porters—as you can tell by my previous, perhaps, slightly more feminine beer choices, but I am now a believer! I daintily scooped at the ice cream, floating amongst pools of dark vanilla porter, until I reserved myself to let the two meld together. The result was a magical marriage of childhood memory and adult rite of passage! I’ll admit I may have taken down that second half of the glass with the might of a seasoned porter drinker, wondering where this magical dessert has been hiding for all my adult life.

Overall, I could definitely see myself returning for an extended Saturday afternoon stay at Eureka! Trying one of their 31 whiskey choices or one of their hand-crafted cocktails made with fresh fruits and herbs from one of their many jars lined up along the bar. Eureka! is unique in that it has a laid-back atmosphere, great food and extensive list of rotating local beer taps. All of this nestled amongst the bustle and debauchery that can be found along 6th street and the dozens of bars that border it in each direction. Despite making my first visit during one of Austin’s busiest tourist times, Eureka! did not disappoint!