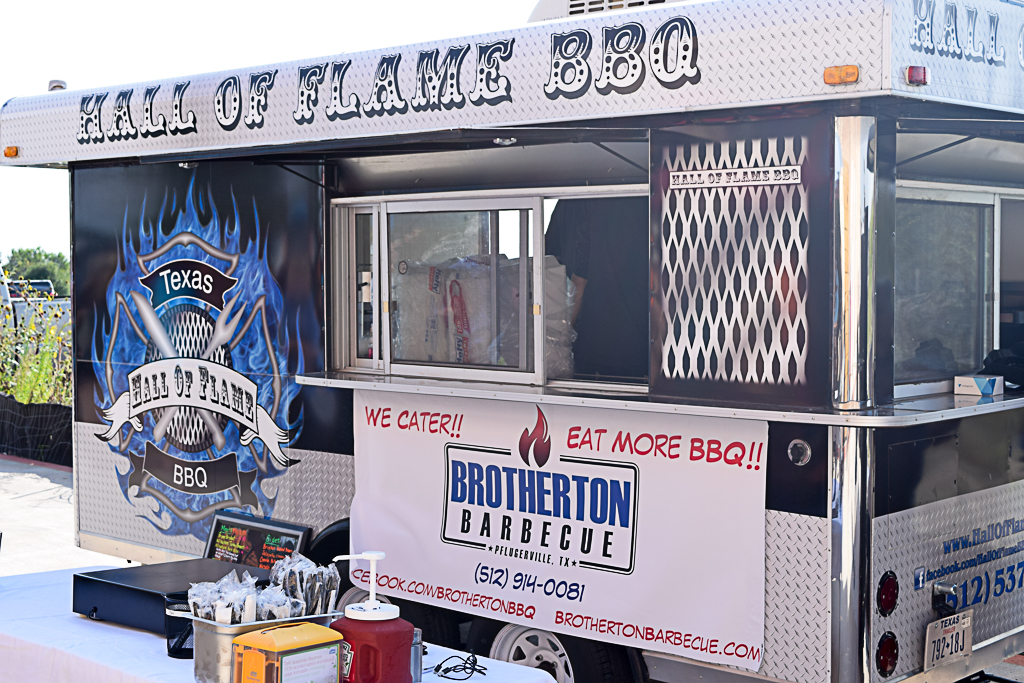 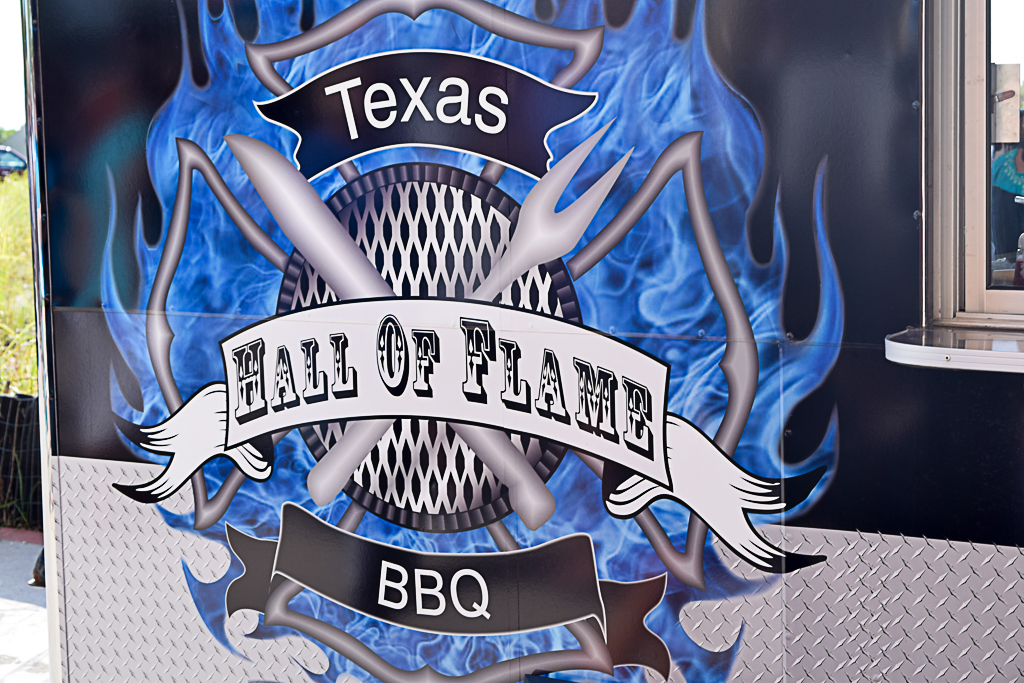 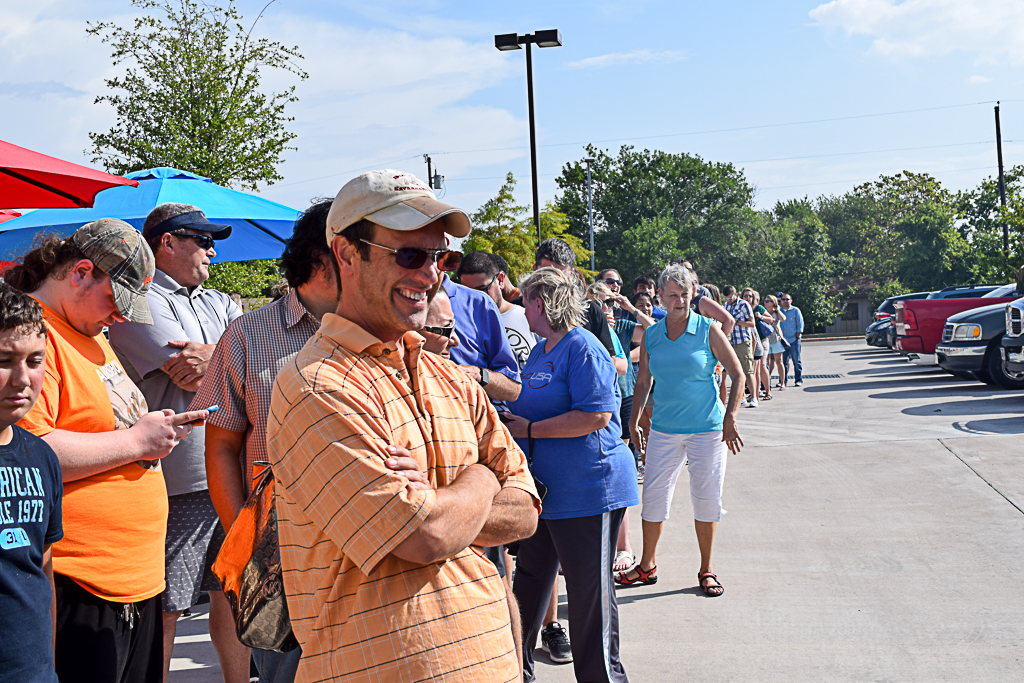 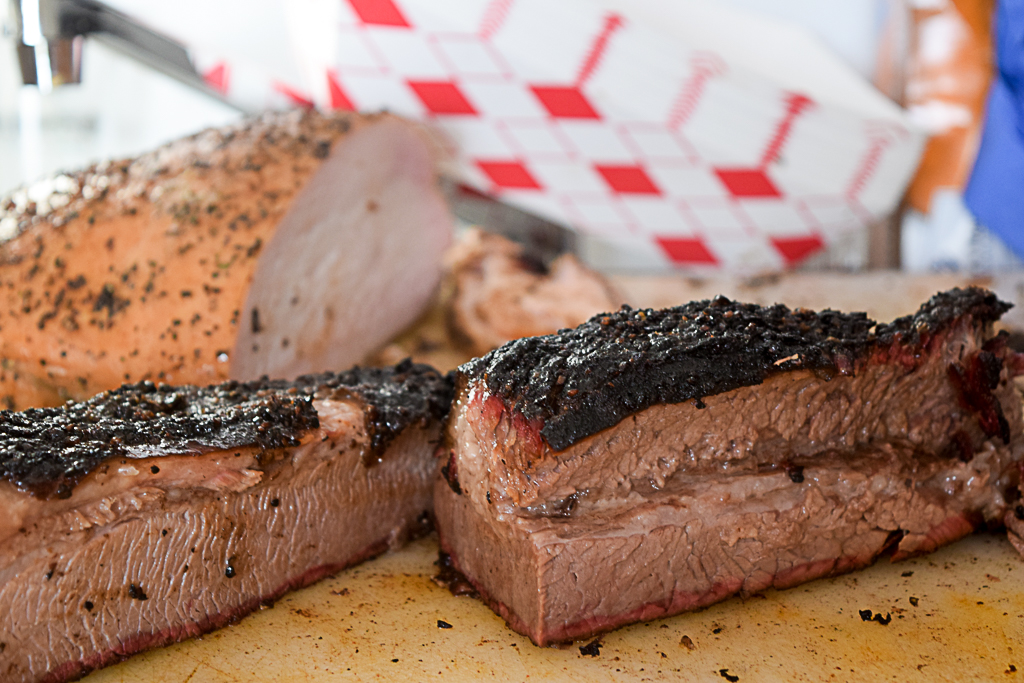 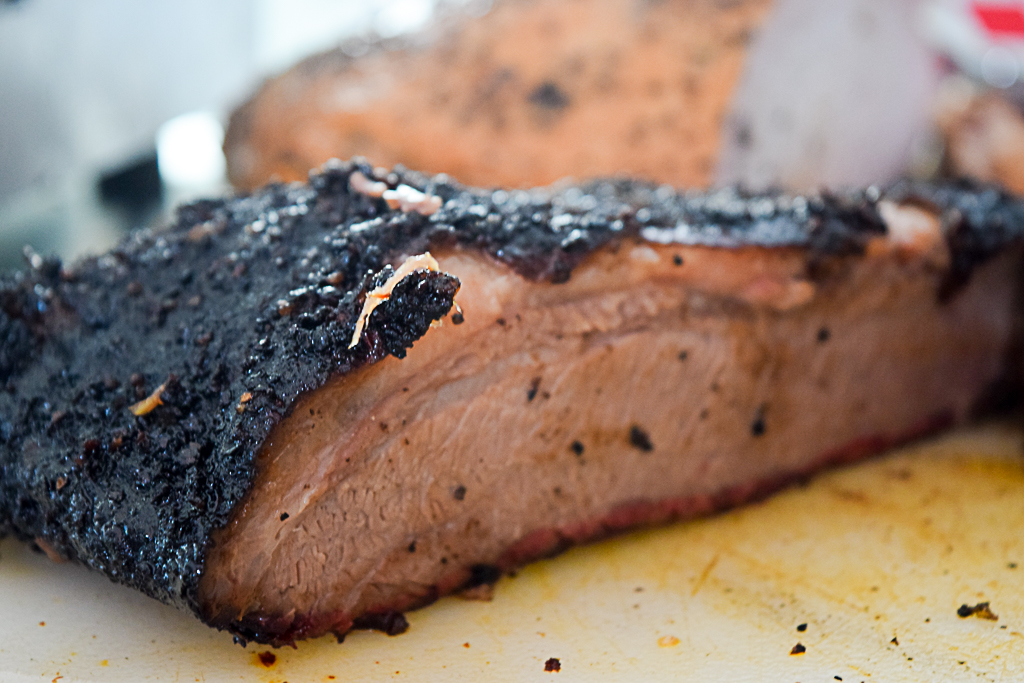 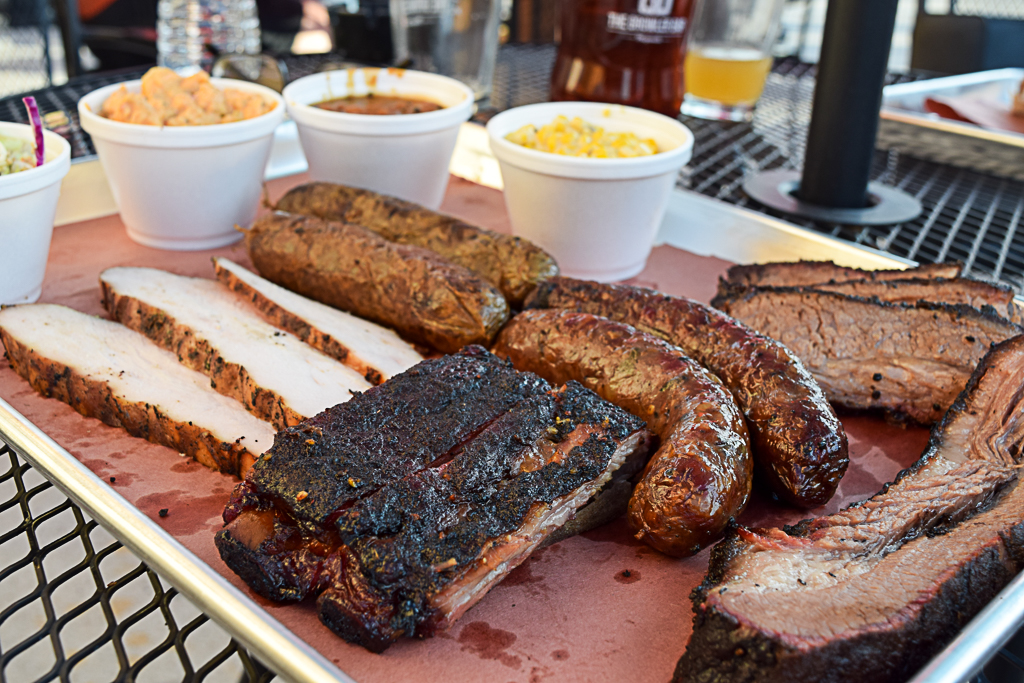 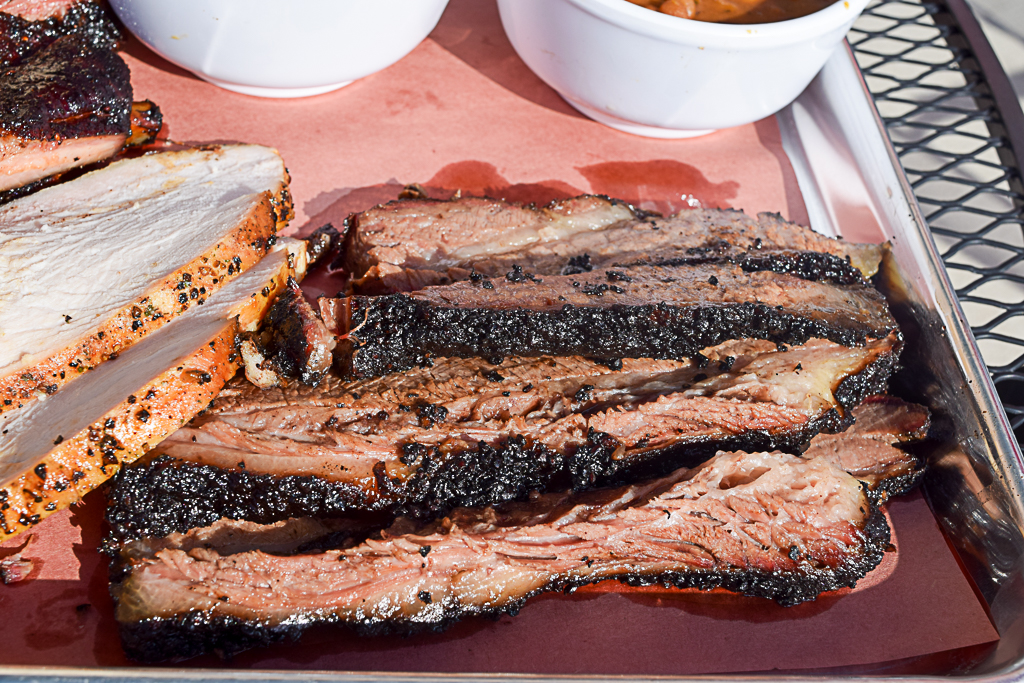 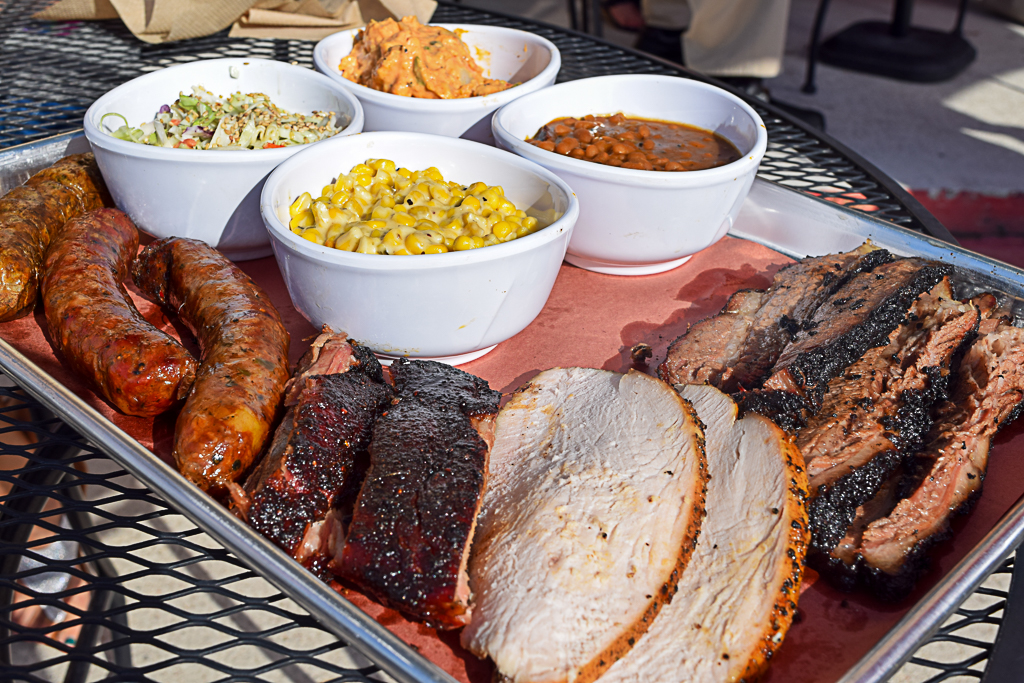 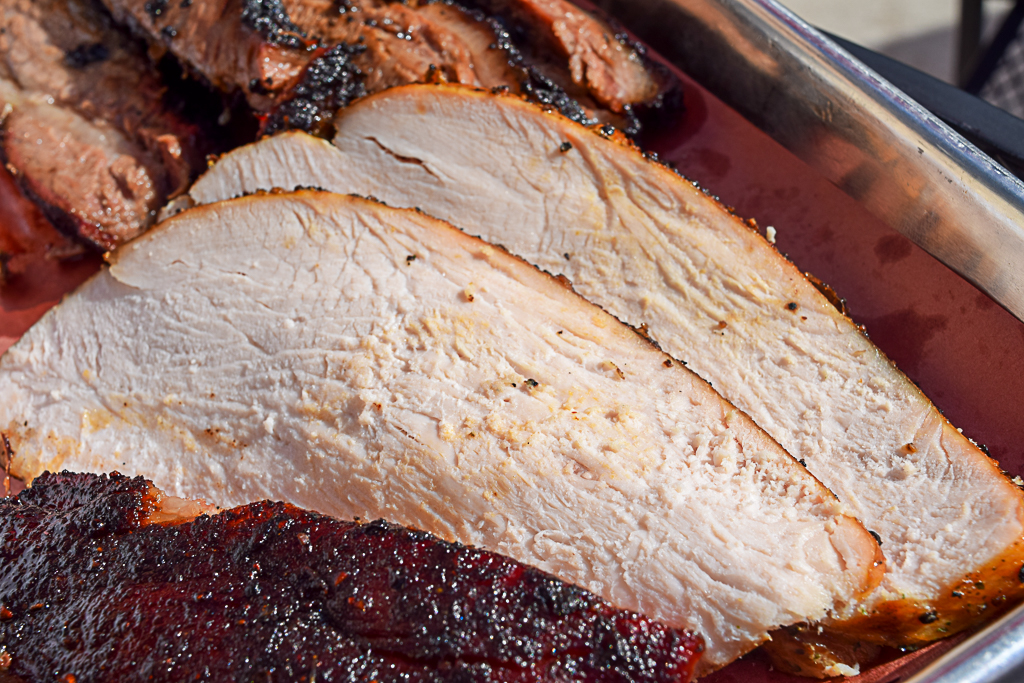 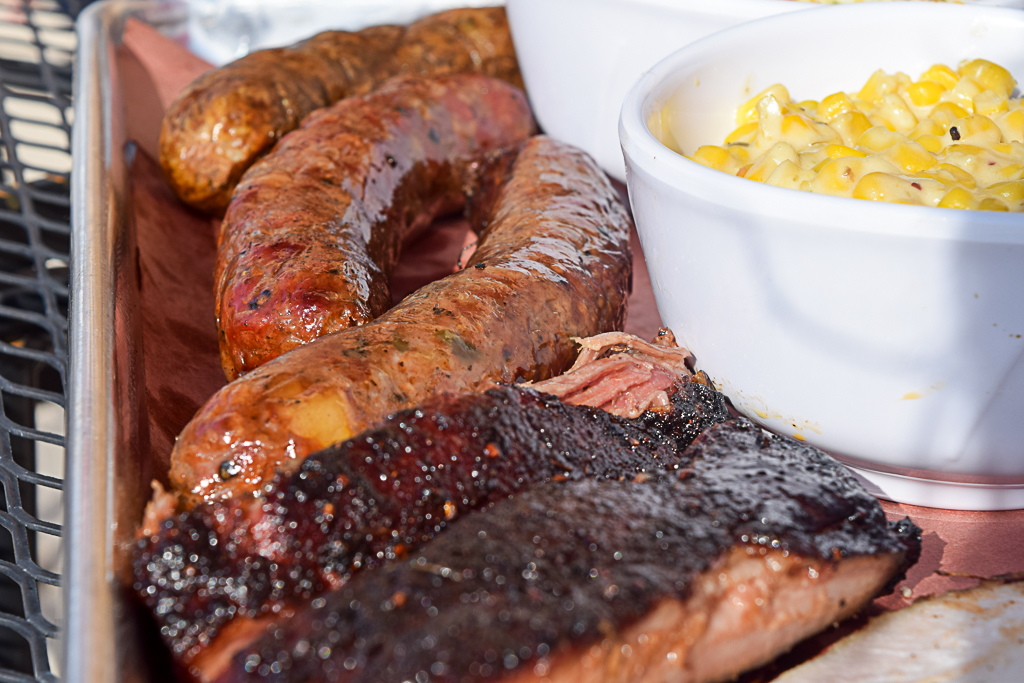 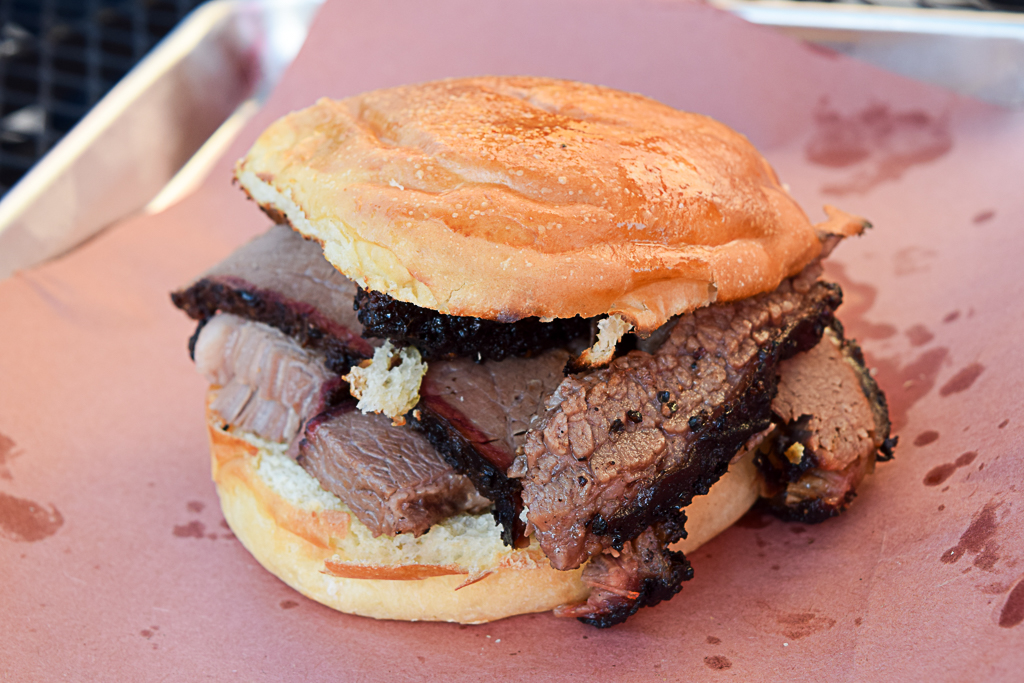 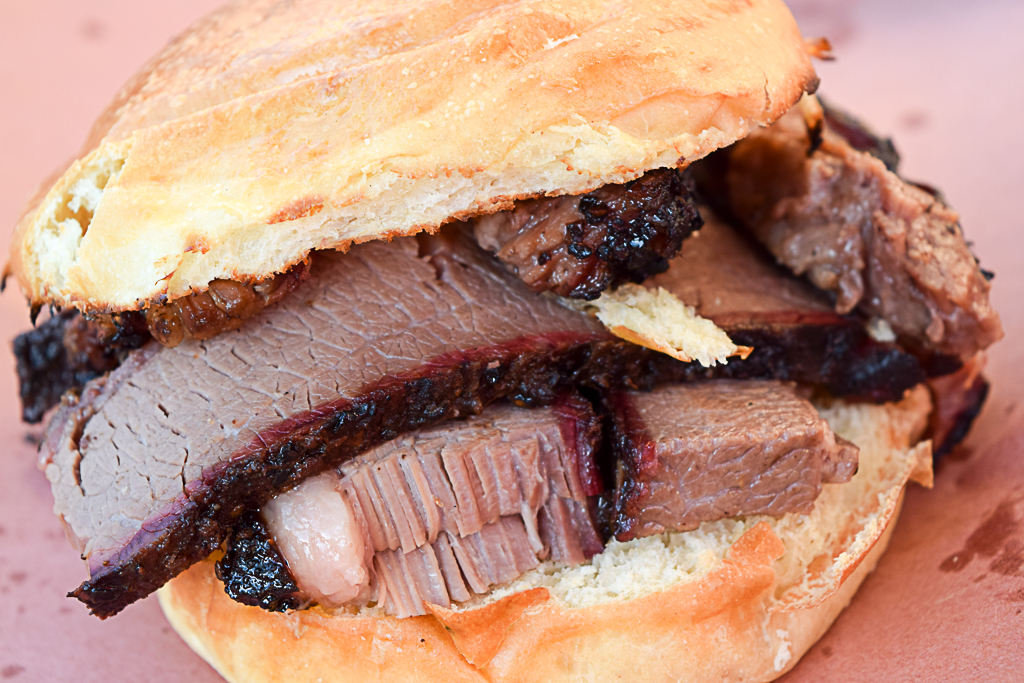 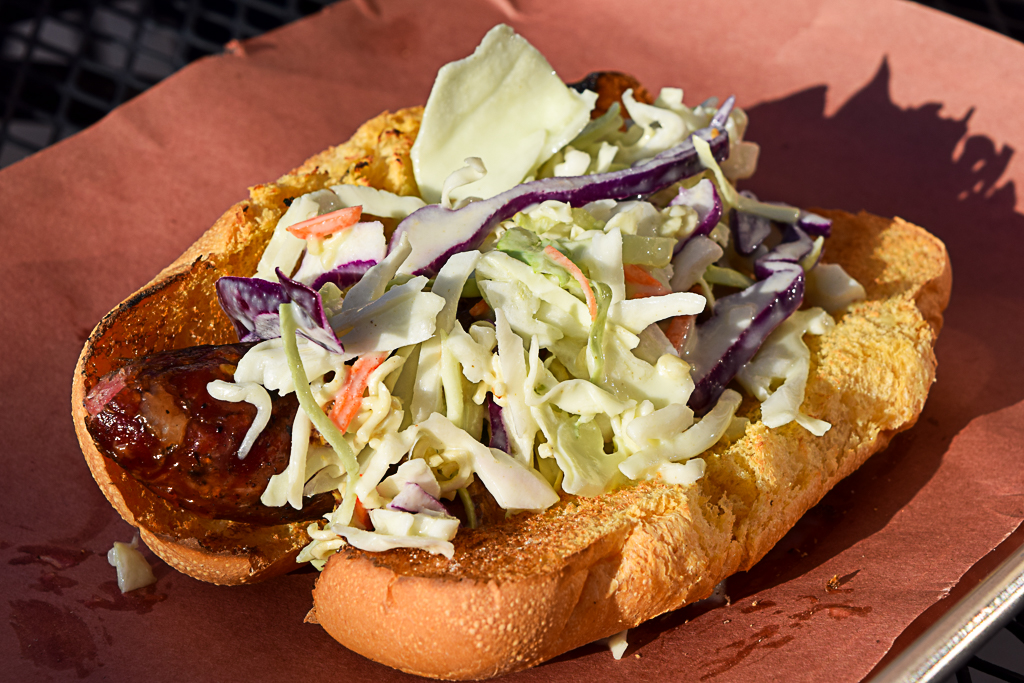 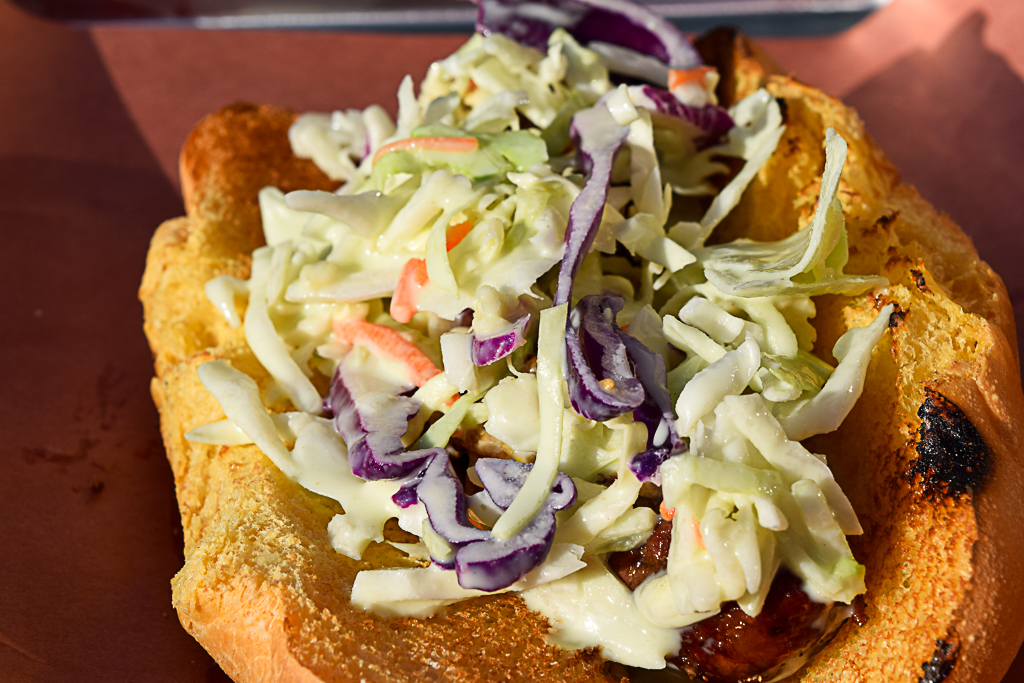 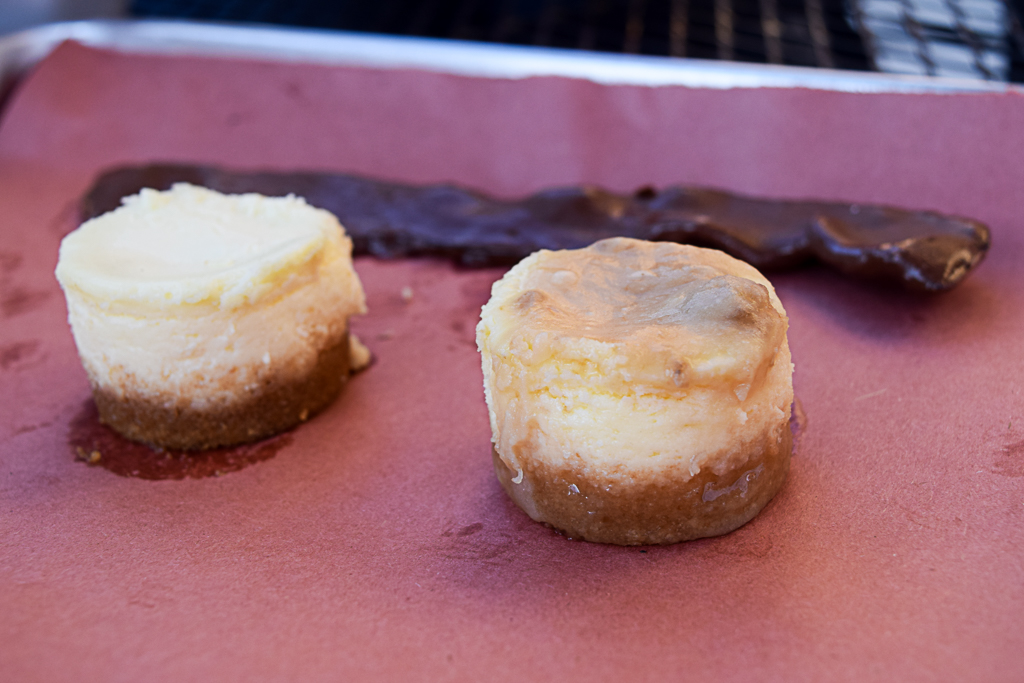 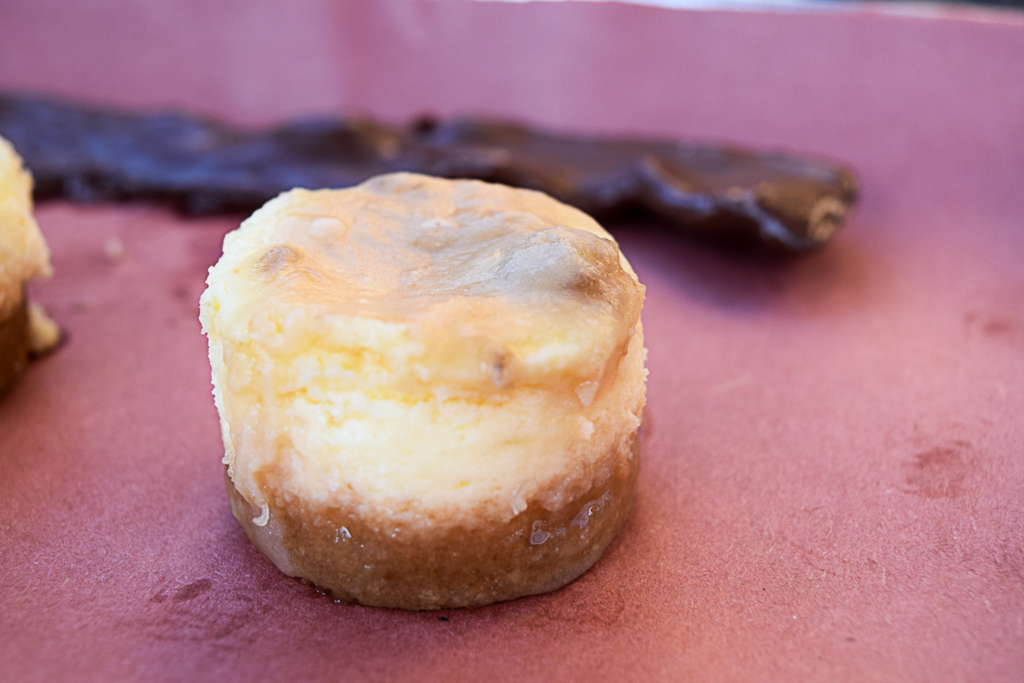 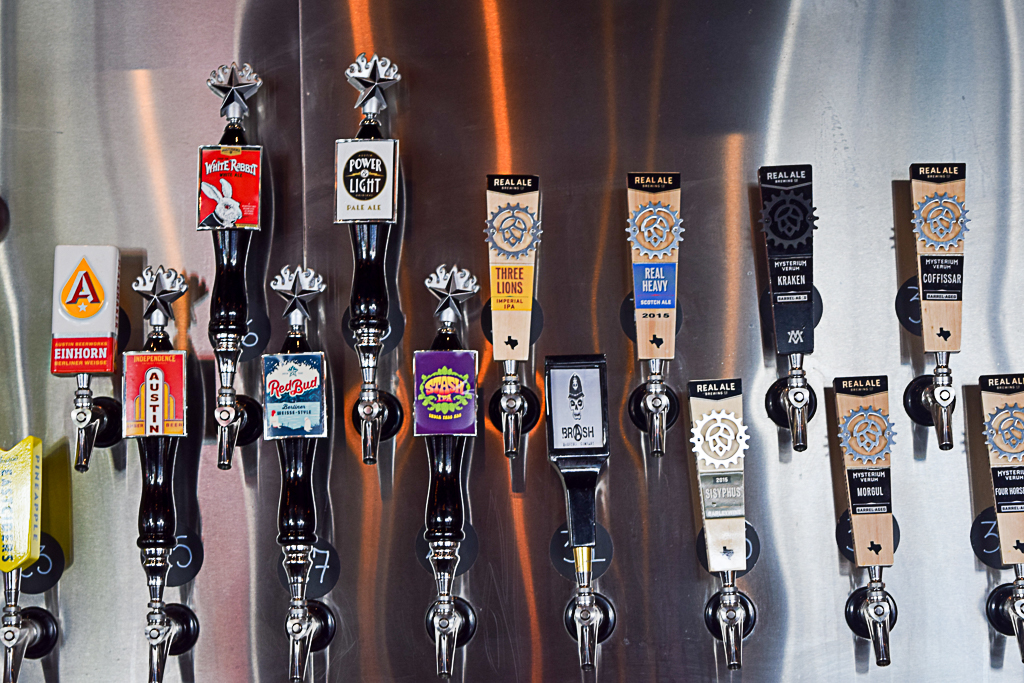 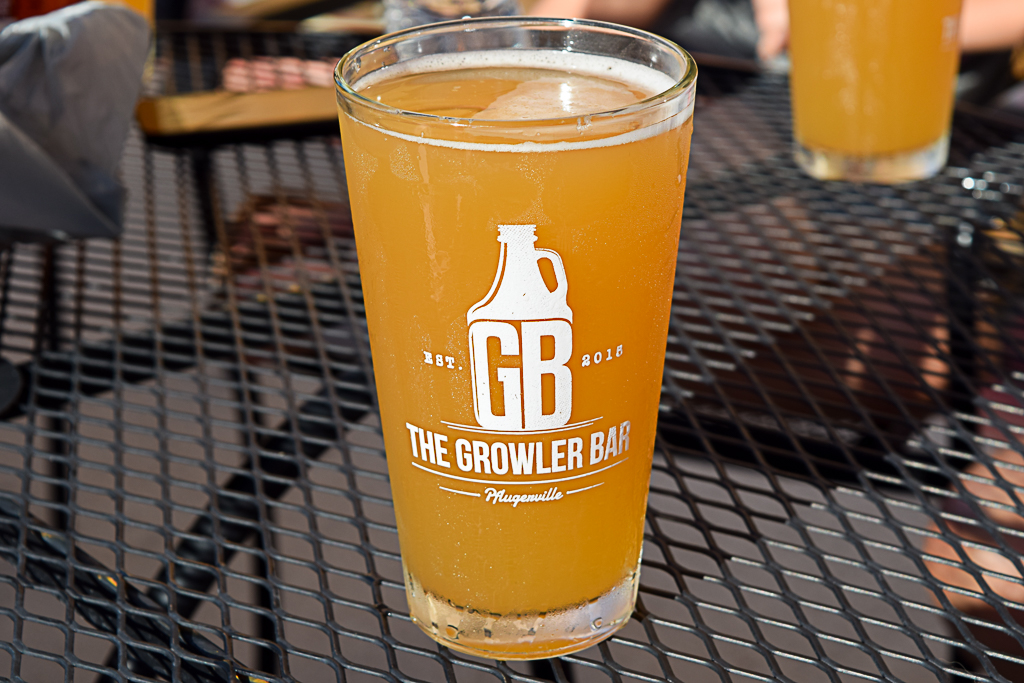 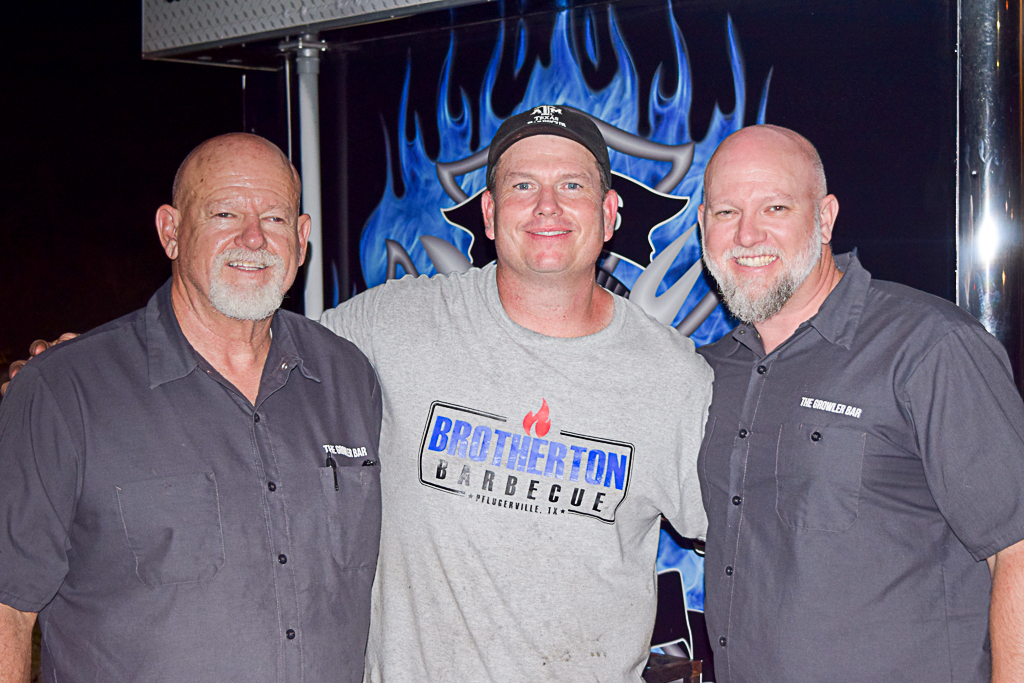 John Brotherton is back and his barbecue is SMOKIN HOT! People lined up for more than three hours for the opportunity to eat his food. And it was worth the wait!

John, now dubbed the Pfranklin of Pflugerville, cooked 20 briskets, 40 pounds of sausage, 30 pounds of boudin, 10 racks of ribs, and 30 pounds of turkey breasts. There was enough meat to fill an entire smoker. He also created a ton of original sides including Wasabi Coleslaw, Creole Potato Salad, Brisket Baked Beans, and Jalapeño Creamed Corn. Talk about a feast for the masses!

Not only does Brotherton Barbecue and Catering sell some of the best BBQ in Texas, but he also teamed up with food truck royalty such as Hey!… You Gonna Eat or What?, Fried and True and the Celia Jacob’s Cheesecake Experience to provide a nice twist on some classic recipes.

Our culinary journey began with a beautiful tray of meats and sides!

The brisket tasted like beef that was smoked over a fantastic blend of oak and pecan. The texture and taste of the bark was heavenly! Some people like it moist, others like it lean. I tried both and can honestly say that they were both amazing!

The ribs were an outstanding combination of pork ribs, Brotherton’s rib rub and the Hey!… You Gonna Eat or What? cherry fig jelly; which was spritzed on the ribs during the smoking process. The ribs were flawlessly seasoned creating a glorious combination of salty, sweet goodness!

The turkey breast, which can only be described as divine, was flavorful, moist and juicy! I can only assume that some type of brine was used. In any event, the turkey breasts were cooked with precision and the leftovers remained juicy after two days in my refrigerator. It made for a tasty midnight snack!

All sausage is not created equal! Case and point, Brotherton’s mild sausage is made from 100% brisket and smoked to perfection. It had just the perfect snap that you feel when you bite into fresh sausage, Furthermore, the salt and spices were the spot-on. This sausage was melt in your mouth good!

Tres Amigos was made with 100% ground brisket, jalapeño, green chili, chipotle, and monterey jack cheese. Some might have thought that it would be too hot for their sensitive taste buds? Those people were wrong! Brotherton knew that it might be intimidating at its normal heat level and made adjustments accordingly! There’s one thing I know for sure. It was outrageously good!

The Crawfish and Shrimp Étouffée Boudin was a mixture of half crawfish/shrimp étouffée and half boudin that was stuffed and smoked. Crawfish has a stronger flavor than shrimp and both tend to take on the flavors with which they are cooked. So it tasted like tiny southern lobsters that had been cooked in a fantastic blend of cajun seasoning. The boudin was full of Louisiana love!

The Brisket Sandwich was outstanding! Mine was stacked with both moist and lean brisket with the option of Brotherton’s homemade Cherry Barbecue Sauce. But it didn’t need any sauce! How many times can you say that you happily ate a sauce-free barbecue sandwich? For me, the answer is just once. One of the things that helped make this sandwich so good was the addition of scratch-made buns from Lil’ Mama’s in Pflugerville.

For the sake of full disclosure, I don’t like mustard! However, Brotherton’s Growler Dog changed my mind. The Growler was a scratch made sausage topped with wasabi coleslaw and a mustard sauce consisting primarily of Independence Brewing’s Stash IPA and mustard. The thing that I loved most about the The Growler was the wasabi coleslaw, which was crunchy and slightly sweet with a nice warm kick in the pants! The overall flavors were rich and complex and after everything I tried, I can honestly say that this was my favorite dish. Or was it the turkey? Or the Brisket sandwich? Or Tres Amigos?

All four side dishes were wonderful! In particular, the Wasabi Coleslaw was outstanding. It also has a bit of a cult following. And after trying it, I can see why. There are a myriad of flavors and textures within this punchy side dish.

Dessert is a many splendor thing! If chocolate covered bacon is your thing, then you are going to love the Chocolate Covered Bacon from Fried and True! But, if you love cheesecake you’re going to flip over the Celia Jacob’s Cheesecake Experience Bananas Foster Cheesecake!  It is a new flavor that made its debut on Wednesday night. And it is full of banana and liquory goodness!

For those of you who haven’t heard, it was 100 degrees and the line stretched all the way to the street. Jason Kemp, the owner of The Growler Bar, helped make the wait for Brotherton’s barbecue easier by using his mobile unit to serve ice cold craft beers to the people in the barbecue line. Kemp has 59 computerized taps that are rotated out after each barrel is tapped. The Growler bar is a family friendly bar that opened on March 5th of this year. They provide free play games and free popcorn. They are big on sourcing local brews. So if you would like to support your local breweries, The Growler Bar is the place to go…

John Brotherton is planning on purchasing an additional smoker to accommodate the large crowds. Check back with Good Eats Austin for updates on Brotherton’s next two popup events in August.

To learn more about Brotherton Barbecue and Catering or The Growler Bar, please visit them on their Facebook pages.